“Over the last two years our company has designed and implemented an economic planning approach to several major projects. A computer-based economic ranking of a reserve blocks model was used to identify the strategic long term mine planning sequence for a large NSW operation. This process identified and calculated the FOB cost attributable to each longwall panel, thus allowing the mine sequence to be based on profit maximisation.”

Before the widespread prevalence of computing technology in mine planning, this level of detail and sophistication was unthinkable but became imperative with the advent of big tonnage operations such as Moranbah North, Crinum and Newlands. Consulting engineer, Edmund O’Donovan, of E. J. O’Donovan & Associates, believes the entry of Cyprus to Australia in 1996 was a major catalyst in changing thinking about big tonnage mines.

“People realised you didn’t have to go from 1 million tonnes to 1.5Mt to 2Mt to 2.5Mt. You could go from 2Mt to 5Mt. There was no good reason why not. But it was a problem for the industry at large because not many people had experience with really big tonnage operations.”

Today, annual production of 3Mt is fairly routine, and is set to rise as newer operations re-examine earlier mine plans against economic and other factors.

Speaking at a mining conference in Queensland, Moranbah North mine manager Hugh Morrison said 10Mtpa out of the Shell Coal mine was possible. “Development rates, costs and resource utilisation have caused the mine to rethink the mine plan,” he said. “A 350m-wide face reduces the development metres to longwall tonnes ratio significantly. Calculations indicate the additional cut time per shear is marginal — about six minutes — while the tonnes per shear is proportionally greater.

“AFC power such as 1100kW and 52mm chain come to mind, but bring a host of other issues which will be cost justified.”

While new operations can engineer solutions for the perennial problem of coal clearance, it remains a germane issue for many older operations. David Clark, of International Mining Consultants, which recently relocated its offices to Brisbane to be closer to Bowen Basin clients, said NSW was seeing older mines with small conveyor systems investigating underground bunkers in order to even out coal flow.

“The cost of upgrading an existing mine to increase coal clearance is substantial and usually means you have to go back to scratch by re-driving the roadways for instance,” Clark said. “And the problem with longwalls is it’s either maximum capacity or zero. There is no happy medium. If you can maintain a continuous flow onto the belt and make the conveyor system peak all the time it is much more cost effective.”

Clark added that the uni-directional shearer operation favoured by most mines compounded this problem because 60% of coal is produced in one direction and 40% in the other. The result is continued uneven loading of the coal clearance system.

For an operating mine, exploring new technologies usually goes hand in hand with committing valuable time and sometimes resources to ascertain whether they work. Production delays can eventuate while new methods are trialled. The more intimately new technologies interface with the operation’s production drivers, the less popular they are likely to be.

Rougher circuit commissioning last milestone on the way to 12Mtpa. 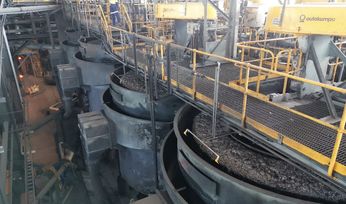 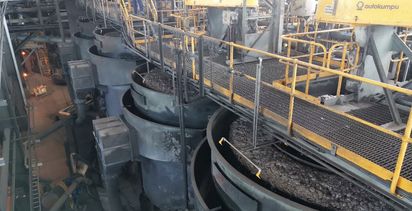 Cleaning up at Century