Appin and West Cliff performed well during the period while Tower’s production was affected by strata problems. Work on Elouera replacement mine, Dendrobium, has progressed to the point where BHP plans to submit an Environmental Impact Statement (EIS) this month.

According to the newsletter, mining would soon move beyond the zone of poor working conditions. The latest Joint Coal Board (JCB) statistical review indicate a drop in Tower’s annual production for the year ended December, 2000. Tower produced 1.26Mt, a drop of 34.7% compared with the previous year.

Coal Trade said the problems have been offset by good performances at BHP’s Appin and West Cliff collieries, which also produce coal from the Bulli Seam. The JCB statistical review shows that Appin produced ROM total of 263,567t for the fourth quarter ended December 2000, and a calendar 2000 total of 2.37Mt, up 15.3% on the 1999 calendar year. West Cliff produced 313,392t for the quarter and 1.64Mt for the full year, up 43.2% on the previous year.

Mine closure is still slated for Cordeaux colliery, following completion of extraction of longwall 31 at the end of March. For the fourth quarter ended December 2000, the mine produced a ROM total of 198,238t according to the JCB statistics while annual production for 2000 totaled 763,000t.

Performance at Elouera, due to close in 2004, remained steady during the year with total ROM output of 1.7Mt. Elouera is to be replaced by BHP’s Dendrobium project, which will be the first new coal mine in the Illawarra for more than two decades. A major investment feasibility study was launched in May 2000 and the EIS will be lodged in March 2001.

“Dendrobium will replace Wongawilli seam output from Elouera – the high vitrinite content/high ash Wongawilli coal is required to boost coking properties of the blend with the lower vitrinite/low ash Bulli Seam coal from the other BHP longwall mines,”Coal Trade said.

Elouera was formed from the amalgamation of the old Wongawilli and Nebo collieries and utilises the pre-existing Wongawilli mine portals. Dendrobium will use the old Nebo surface infrastructure for all facilities except coal haulage. Operations will be upgraded to accommodate a workforce of 200 and new entries will be driven. Dendrobium is expected to operate on a three shifts per day, five days a week basis, with maintenance activities carried out on weekends.

Coal will be transported via a covered conveyor from a portal in the Kemira Valley to the existing rail loading facilities. A nominal 150,000 tonne raw coal stockpile will be established to manage production surges.

If approvals are in place by the end of 2001, BHP expects to begin production next year, with longwall production beginning in 2005.

The Big Australian brings out its own COVID-19 contact tracing app to track workers in Chile. 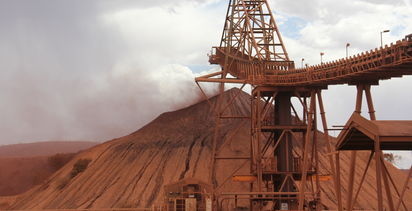