THE twentieth mining fatality in the US this year was reported Thursday when one worker at TECO Energys Hazard No. 4 mine in Kentucky was killed in a roof fall accident.

Roof bolter Tim Caudill, 33, was relocating equipment about 8.25am local time when a section of roof between two bolts fell and struck him. His fellow miners tried unsuccessfully to revive him with CPR, and the US Mine Safety and Health Administration was notified at 8.47am, the company said. His body was removed from the mine about two hours later.

TECO Coal president Jim Shackleford expressed his condolences for the miner’s wife and two children and said the company would work with state and federal agencies to determine the cause as well as conduct its own investigation. “He was a valued member of our team,” he said.

“We pride ourselves on our safe work environment,” he added. “This is a highly unusual situation for our company.”

No other injuries were reported in the incident, and no indication was given as to whether production would be halted at the operation.

Kentucky-based TECO Coal is a subsidiary of TECO Energy, headquartered in Florida.

Caudill’s death is the second roof fall-related Kentucky mining fatality in 2006; Cornelius Yates was killed January 10 after a rock fell from the mine roof at Maverick Mining LLC’s No. 1 mine in Eastern Kentucky. 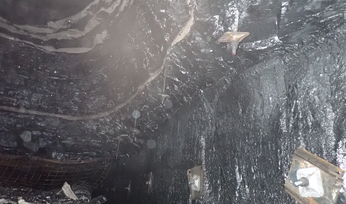