RIO Tinto mining executive Andy Lloyd delivered a strong message to delegates at the COAL21 Conference earlier this month - get onboard with low emissions initiatives or risk losing out as an industry.

He said a carbon constrained world is "not a threat - it is a looming reality" and that the regional and global transition to a low emissions economy is plagued with challenges, whether policy based, commercially based or technological.

Lloyd applauded the Australian Government taking initiatives and drafting geosequestration legislation - soon be made available for comment - but said the legislation will be applicable only for offshore sequestration and state governments must introduce similar legislation for onshore cases.

"In short [government] must enable geosequestration rather than simply seek to regulate it," Lloyd said.

"We hope that the states and the Commonwealth are able to deliver a national regulatory regime that recognises that sequestration geology does not respect state boundaries."

Other important policy processes outlined by Lloyd include the Emissions Trading Scheme that he described as "a very important piece of the policy response to reduce emissions, however, it is only one piece."

"Even with a price on carbon, the market will not deliver the technology revolution required to reduce emissions at the rate and scale required to stabilise atmospheric greenhouse gas concentrations."

Another challenge facing industry is the commercialisation of low emission technology that currently is unable to compete with conventional coal fired electricity.

"The Energy Supply Association of Australia, in its submission to the Federal Government Taskforce on Emissions Trading, estimated that even with increasing energy efficiency and conservation, an investment of $A35 billion will be needed between now and 2030 to meet Australiaâ€™s increased demand for energy," Lloyd said.

Lloyd called on owners of power infrastructure to leverage profits from their existing position to make investments towards a low emissions future.

"One need look no further than American Electric Power in the US - the world's largest coal fired utility - which is able to leverage its scale and in 2004 declared that it would no longer be building any conventional coal fired generating capacity unless it had some ability to manage the carbon emissions from each such investment," he said.

The final hurdles facing the industry, according to Lloyd, are technological challenges, in particular ensuring technologies developed around the world are able to work in Australia "in our conditions, using our coals and disposing of CO2 into our geology".

He said securing options for effective and low cost geosequestration was an initial priority, to be followed up by implementing IGCC, PCC and Oxyfiring low emission technologies and supported by research and development.

"R&D, while vitally important, is not as glamorous as developing new technologies. But the successful deployment of these technologies in Australia, and the need to safeguard the future exports of Australian coal, calls for the coal industry to work closely with researchers to develop focused R&D programs as a precondition of coal industry funding," Lloyd said. 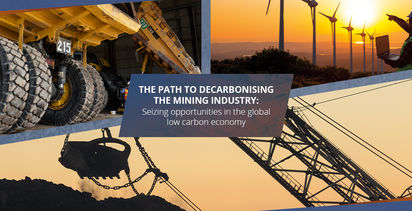