THE newly opened Signal Peak operation in Montana recently reported non life-threatening worker injuries to the US Mine Safety and Health Administration.

According to agency spokesperson Amy Louviere, an incident on February 21 involved a mine employee who cut his arm on a sharp piece of metal.

On February 24, a contractor employee for Fenner Dunlop Conveyor Systems and Services broke his finger and received stitches for a pinching injury sustained while handling materials.

Louviere noted that neither injury was required to be reported to MSHA’s call center under the outlines of Part 50.

“Both were reported on 7000-1 forms according to Part 50.20 requirements,” she said, noting that neither deemed a 103(j) or 103(k) idle order and thus the mine did not close. No violations were issued for either event.

While MSHA did not provide details, local media reported two other incidents at Signal Peak on undisclosed dates where workers landed on their knees after slipping in mud or stepping on coal.

According to federal outlines, all serious and life-threatening injuries and accidents must be reported to MSHA’s toll-free call center within 15 minutes.

The injuries are the first reported to the agency since a mine employee working on a mantrip was killed on January 2 when the unit rolled off a jack. An investigation of that incident is ongoing.

The operation had been dealing with high carbon monoxide readings in January, even making an internal decision to idle for a short time as numerous attempts to improve ventilation were performed.

“Signal Peak has had an issue with carbon monoxide, which seems to be produced once the coal is exposed to air,” Louviere told ILN Friday of the mine’s current status.

“There is no evidence of a heating or fire. Mining is proceeding in a normal fashion with the exception that daily monitoring of the affected area is being performed and shared with MSHA.”

She noted that federal reviewers are collecting samples and watching the operation closely.

Signal Peak, opened in late 2009, is Montana’s only underground mine.

Luckily, no fatalities or injuries. 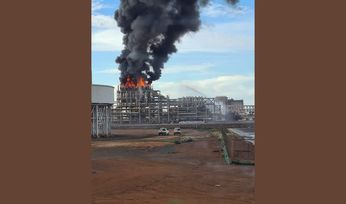