Ergonomic tools get a run at Tahmoor

HYDRAULIC supplier Enerpac now has its wrenches underground at Xstrata’s Tahmoor longwall, which is says will improve workplace safety and efficiency. 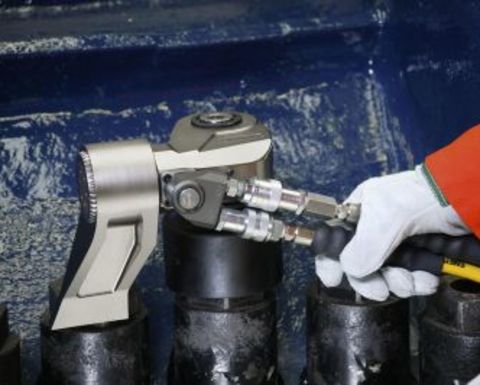 Enerpac’s ZA hydraulic pump, together with its all-steel S3000 torque wrench, will be used underground to remove and refit cutter heads on continuous miner tunnelling machines.

The two-speed pump will be used to actuate the rugged S3000 wrenches which will remove and refit socket head cap screw fasteners with an extreme force of 700 bar.

“We are very happy with the job that the tools are doing because it has made the task a lot easier and much safer than the previous method, which involved trades persons using only an Allen key to draw on a 1440 Nm torque wrench while standing on top of a continuous miner adjacent to the rock-cutting picks,” Priest said.

Miners can now complete tasks working at ground level while standing, instead of working on top of the equipment.

“Also we can now be confident that bolts are being torqued up the correct setting. The S3000 is a steel unit which makes it usable in the underground environment, where we are not generally permitted to use aluminium,” Priest said.

The S3000 wrenches are nickel-plated for corrosion resistance and are part of a range of square drive wrenches up to 34,000 Nm.

Enerpac’s steel wrenches and ZA air pumps are intrinsically safe to use in underground coal applications.