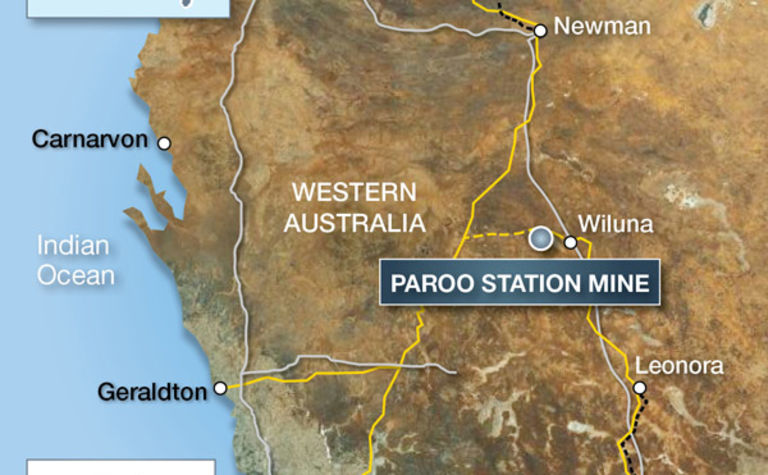 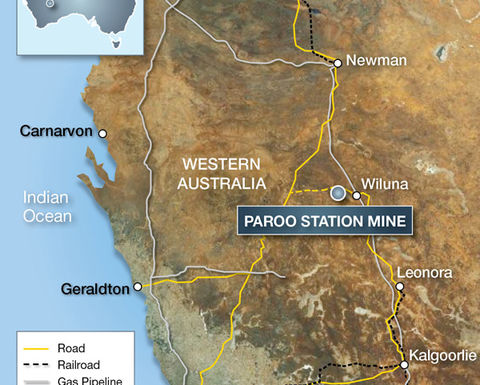 A map showing the Paroo station mine location.

The Paroo Station lead carbonate mine and associated concentrator plant has been in care and maintenance-mode on and off since 2005, due to the high cost of transporting lead in concentrate from the mine to Fremantle Port and the unpredictable nature of global concentrate smelting charges.

Operations were again put under care and maintenance at the start of 2015 in response to depressed world metal prices, where they remain.

At the old Magellan lead project Paroo’s product is transported in sealed double-lined bags inside locked shipping containers by road to Leonora and then on to Fremantle Port by rail, for export.

In a move to reduce pollution and the impacts on health and value-add to a bulk commodity LeadFX proposes building a hydrometallurgical facility adjacent to the existing concentrator processing facility, to produce 99.99% pure lead ingots.

The hydrometallurgical facility will be located next to the existing processing plant, and its acid leach circuits, electro winning tank house, cathode melt shop and impurity filtration capacity will enable conversion of the lead carbonate concentrate, to about 70,000t per year of lead metal.

The lead then goes to the An impurity removal circuit for treatment, and lime is added to neutralise any residual acid for precipitation of iron and aluminium, ahead of the electrowinning circuit, before electrolyte from the leach circuits is pumped to the electro winning cells within the tank house.

Lead is then washed to remove any residual acid and melted in an induction furnace in the automated lead ingot casting area.

Leaching and electrowinning also result in the generation of CO2 gases, which are vented to a dedicated scrubber, alongside exhaust gases from the induction furnace that are directed to a baghouse, to capture any airborne particulates.

The new hydrometallurgical facility will also be bunded, so any stormwater runoff and spills can be contained, with the water to be held in a new lined storage pond and recovered and reused in the process stream. A reverse osmosis plant will treat raw borefield water to supply various sections of the facility.

The naturally occurring carbonate hosted lead deposit at Paroo has a mineral resource of 32 million tonnes of ore grading at 4.3% lead for around 1,390,000 tonnes of contained lead.

Since being commissioned in 2005 the deposit has yielded more than 350,000t of lead in concentrate.

As part of the proposal LeadFX also wants approval: to transport lead metal ingots weighing about 25kg each, from the mine for export; increase the on-site power generation capacity to 20 megawatts installed, to be fuelled from the existing natural gas spur line; and increase tailings storage capacity by 19Mt, to take the total to 35Mt within a 209ha development envelope.

In addition, the accompanying mine extension proposal asks for a 400ha extension of the disturbance footprint for additional mining areas, which takes the total to 980ha within a 2094ha development envelope.

LeadFX is not proposing any changes to the mining plan or any methodological tweaks and under the proposal open cut drilling and blasting and loading and hauling mining methods to access the ore and waste from the pits will continue. That said, an increase in the annual mining rate has been proposed, from 1.7Mt to 2.2Mt.

Also, any lead carbonate not processed though the hydrometallurgical facility to produce the lead metal ingots will still be transported in sealed double-lined bags inside locked shipping containers.

The existing diesel-fired power station will be kept on site as a back-up and emergency standby while a new natural gas-fired electricity generation system with an installed capacity of 20MW will be built. The electrical distribution system will also be upgraded to supply electricity loads at the existing accommodation village and the existing borefield, to replace local diesel fuelled generators.

The first stream is a liquor stream with three bleed streams containing water and chloride from the reverse osmosis plant and the leach circuit scrubber bleed plus a slurry stream; while the second stream is leach residue slurry from the second leach circuit, which is returned back to the start of the existing concentrator plant.

Lead exposure can be harmful to workers, and mine operator Rosslyn Hill Mining has an existing Occupational Health and Safety health program on-site to manage the human health risk.

This involves requiring all workers who enter areas on site classified as dirty areas– those with high lead exposure – to wear a P3 respirator to ensure lead dust is not inhaled, along with meeting personal cleanliness requirements.

Also, employees and long-term contractors who are on site for more than eight days must consent to a blood test each month to determine lead in blood levels. A pre-employment blood test is also undertaken to determine the baseline lead in blood level, and the blood samples taken from all employees and relevant contractors each calendar month are analysed by external agencies.

Despite the insistence, RHM noted that in May 2014 a single Peregrine Falcon was seen flying swiftly across the site’s eastern extension area and LeadFX’s  environmental review admitted it was possible that a pair lives in the region and forages over the development envelope occasionally.

At this stage of the environmental impact assessment the EPA will decide whether or not to assess the proposal and, if so, at what level. 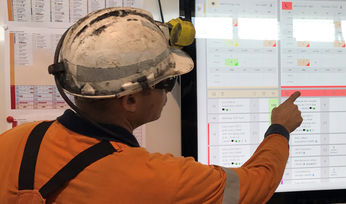 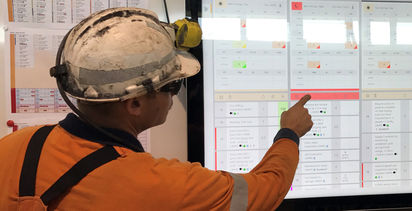 Galena gets jump on Abra