Jennmar to launch new facilities, bolts and own resin

INDUSTRY roof and ground control supplier Jennmar Australia is expanding its manufacturing facilities in the Bowen Basin and New South Wales as it prepares to introduce a number of new products including a galvanised cable bolt, as well as looking towards making its own resin for the Australian market in 2008. 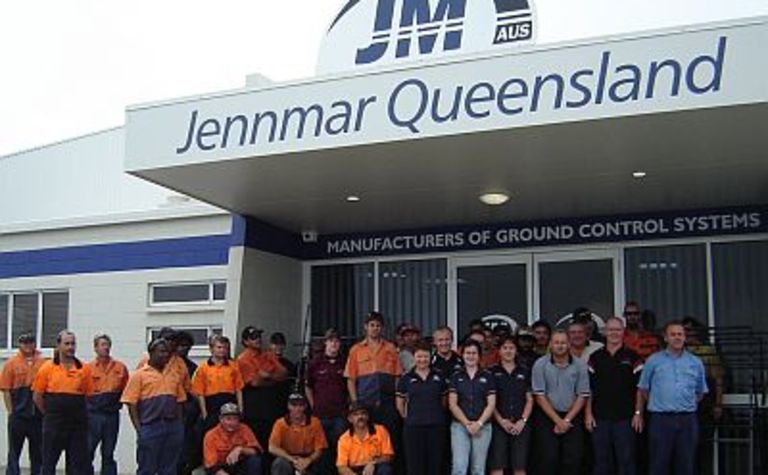 In January 2007 Jennmar will open a new Mackay facility to service clients in the Bowen Basin. The one-hectare site will feature a 3000 square metre plant (up from 1750sq.m), allowing Jennmar to offer greater capacity to its Queensland customers and expand its product range.

Then in August 2007, Jennmar will open its new premises just out of Sydney at Smeaton Grange, Narellan. The 1.2ha site will encompass two 3000sq.m factories. One of the facilities will replace the existing bolt manufacturing facility at Wetherill Park.

The new facilities will allow Jennmar to expand its capacity by 60%.

“By building these new facilities, it allows us to develop our products and services to the industry,” managing director Peter Roberts said.

The new facilities will give Jennmar the capacity to manufacture its new galvanised cable bolt and a number of other products currently being developed.

About to begin manufacturing now, the galvanised bolt is a new version of the super strand cable bolt – already in wide use throughout the longwall sector.

Made from individual galvanised strands and manufactured in Australia from wire rope imported from Japan, this bolt offers greater corrosion resistance.

Roberts said there was a cost difference in adding the galvanised element – but it was not significant.

Also on the drawing board is the Plasbolt – a 22mm bolt with plastic covering to aid in resin mixing in larger holes.

Manufacture of the Plasbolt will commence in late 2007.

At prototype stage for Jennmar is a self-drilling rib bolt – with 2007 earmarked for availability. The bolt now is just going into the trial stage.

A major milestone for Jennmar in 2008 will be when the company starts manufacturing its own resin for the first time.

Currently there is one source of resin in the Australian market and Roberts said while there was no customer dissatisfaction with quality or reliability, Jennmar’s entry into the market would offer mines an alternative.

Jennmar Australia has been able to offer the technology after Jennmar Corp in the US set up its own resin manufacturing facility in Pennsylvania. From early April the company will manufacture its own resin under the brand name J-LOK in the US – the same name to be used in Australia.

Bolting in a domestic supply Jennmar to make own resin

Cobalt Blue bolts to 70% of Thackaringa