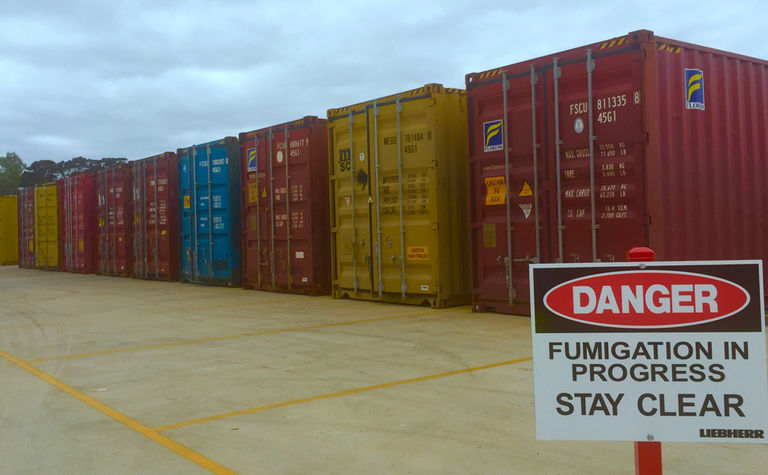 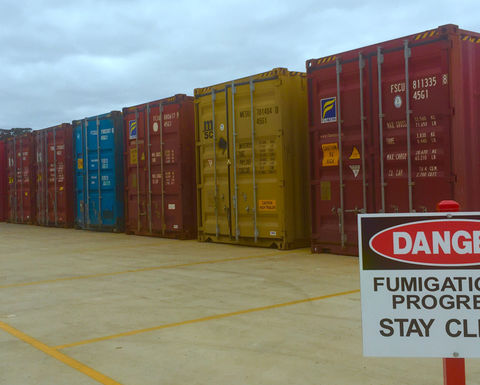 The Fumigation Site at Liebherr-Australia’s National Distribution Centre in Adelaide.

Liebherr-Australia (LAS) has worked in collaboration with the Department of Agriculture and Water Resources (DAWR) to become a Certified Fumigation Site for the Brown Marmorated Stink Bug (BMSB). Located within the company's Adelaide Head Office complex, the locally controlled process has decreased incurred costs and mitigated delays associated with BMSB fumigation laws on imported containers, demonstrating the organisation's dedication to continuous improvement and customer support.

The BMSB infestation in North America and Europe has been responsible for the devastation of agricultural crops. To prevent an outbreak in Australia, in 2017 the DAWR enforced strict rules around fumigation of imported containers and break bulk material.

These fumigation mandates caused significant delays across Australia's ports, in some cases up to five or six weeks. In addition to the time disadvantage, Australian companies incurred substantial storage and demurrage charges from the shipping lines and terminal handling operators.

During the 2017-2018 season, LAS sustained in excess of AUD300,000 in additional costs, excluding the additional transport and lift fees to and from fumigation.

This existing process was identified as unsustainable for LAS, with their ability to provide timely machine equipment and component delivery to customers becoming increasingly hindered.

With Quality and Innovation as Core Values for the business, Steve Daskalakis, National Distribution Centre (NDC) Manager for Liebherr-Australia, explained that an alternative approach to the solution had to be implemented.

"We began consulting with the DAWR Biosecurity Officers to develop a solution. We ran into some roadblocks along the way because of the increasing populations of the Brown Marmorated Stink Bug in France where some of our equipment is exported from, and also because of the chemical that is needed for fumigation, Methyl Bromide, being banned in Europe with the alternative a lot more expensive. The DAWR wanted all fumigation to occur offshore, but this still didn't help the ships being held up at ports," Daskalakis said.

The final option for LAS was to apply for an Approved Arrangement with DAWR. This arrangement would involve LAS's National Distribution Centre in Adelaide becoming a certified fumigation site, reducing the time shipping containers spent in the queue for fumigation at the ports.

LAS conducted a full Risk Assessment with the assistance of their internal HSE department, Fumigation SME Rentokil, Hygiene Australia and freight forwarders, which referenced the ASNZ standard for Methyl Bromide. The Risk Assessment identified that with additional safety measures enforced, the process would not cause any additional risk to LAS staff and surrounding residence. Once the safety measures were enforced, including but not limited to, additional training, inspections, licenses, and ongoing fees, the arrangement was approved by the DAWR.

The LAS NDC began fumigating on site in October 2018.

Since inception, the program has fumigated 130 containers. LAS's NDC handles approximately five hundred 40-foot containers annually. 200 of these containers will require fumigation on site during the BMSB risk season of September to March.

The fumigation process itself takes approximately 36 hours: 12 hours for gas saturation and 24 hours for venting to safe levels, all which can be done on site.

The program has had immediate results, with the team now having access to the containers as soon as the DAWR have provided the digital release documentation. Some containers that would be sitting in queues for weeks are now able to be shipped to the NDC and fumigated in two days.

Tony Johnstone, Liebherr-Australia Executive General Manager of Customer Service - Mining, commented on the impact the process has had on not only the business, but also their customers.

"In several instances, we have had machine shut down situations requiring urgent release of goods and the cargo has been made available to freight to customer's sites in a matter of hours rather than weeks," Johnstone said.

"Availability of our Liebherr equipment is of the utmost importance to our customer support teams. This process has allowed our supply chain to maintain the system forecast dates, which not only improves visibility for customer delivery, but the actual speed of goods to market."

From first presence in Australia in 1970, to incorporation in 1981, Liebherr-Australia's dynamic and collaborative partnerships drive us to focus on total cost of ownership from design to rebuild, and every step along the way.

From first presence in Australia in 1970, to incorporation in 1981, Liebherr-Australia's dynamic and collaborative partnerships drive us to focus on total cost of ownership from design to rebuild, and every step along the way.

With strong expertise in electrical machines, Liebherr presented a duo of machines at Bauma 2019 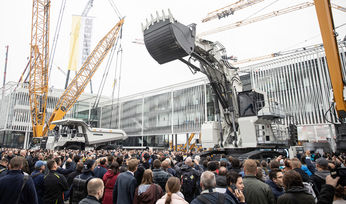 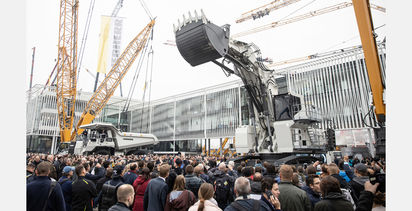