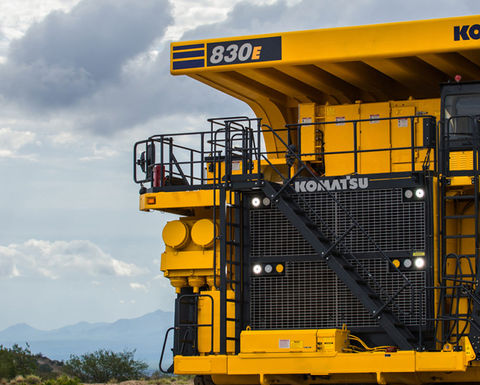 Reducing environmental impact has become such a pressing need of mining companies that equipment manufacturer Komatsu is investing in research and development into possible alternatives to internal combustion engines. Power sources based solely on electricity supply such as trolley assist, energy storage and green hydrogen fuel cells are all viewed as potentials in the pursuit of zero emission haulage.

In the meantime, the company is refining the design of its diesel-electric drive products to place far more emphasis on the efficient use of diesel generated electrical energy, to drive parasitic loads such as on-board cooling. The increased utilisation of generated electrical energy is a critical step towards reducing diesel fuel consumption and may also be key to reducing the dependence on all diesel powered generation. The company's latest dash 5 electric mining trucks, incorporating recently released Tier4 engine technology options, have enjoyed substantial take up across the Australian mining industry and are generating interest in New Zealand. More than 140 Tier4 Final dump trucks have been sold throughout global operations and have clocked up 1.2million total operating hours since their commercial release in 2018.

"Our two imperatives have been to meet the increased requirements of corporate social responsibility and continue to deliver improvements in operational efficiency measured in cost per tonne," Jason Arthur, Komatsu's national product manager of electric drive trucks said.

Mr. Arthur is a 25 year veteran of the mining industry. He has spent the majority of this time supporting electric drive trucks with postings in the USA, Indonesia and Australia as well as imbedded deployment within two major Australian mining contractors. "There have been two major improvements in my work lifetime," he said.

"The first was the introduction in the late 1990s of brushless AC power units made possible by advanced control systems driven by high-speed semi-conductor technology. Previous DC delivery was maintenance intensive, could be unreliable and limited in its application at times.

"The second breakthrough has been the introduction of high-pressure electronic diesel injection systems and the take-up of emission reduction technology such as Tier4 engine standards which have substantially nullified emissions of particulate matters and nitrogen oxides (NOx) by 99percent, compared to pre-2000 levels."

The next major step will be to find an alternative to diesel powered units entirely, Mr. Arthur said. Until then, there will continue to be incremental advances as manufacturers explore the synergy created between onboard components to deliver improvement. The reduction in the dependence of parasitic components on the primary diesel power source is a major example, Mr. Arthur said.

"Fuel use, emissions, and even noise abatement will all be enhanced as engineers consider alternative energy sources," he said. "Traditionally, ancillaries like air conditioning, compressors and hydraulics drew energy directly from the diesel motor. "Fans which were needed to cool the electric drive system were once directly coupled to the engine and diesel driven. Now they operate from the electric system and intelligent control enables that power usage to occur only on-demand rather than full-time. The energy saving is substantial.

"The result is a significant reduction in engine RPM required and fuel burnt.
"Ten years ago, our engines were rated for 1900rpm maximum in drive mode and 1500rpm on retard.

Parasitic load management not only reduced fuel consumption by up to five percent, but the lower noise levels from lower RPM had contributed substantially to reduction in acoustic energy.

The complex equation means that every primary reduction of 3db at the truck results in a halving of the sound-power level, effectively the noise the human ear can hear.

Hybrid, trolley assist, energy storage systems and hydrogen are all considered alternatives to the current diesel-electric model. "In the future, it is unlikely there will be one energy source," Mr. Arthur said. "Our customers will have individual requirements. It will be important to try and remain agnostic, and service all customer needs."

Komatsu customers in Canada and Finland are soon to initiate an active trolley assist operation with the recently launched 830E-5 dump truck. The trolley system is effectively an external power source, usually an overhead electricity supply, to which the dump truck is momentarily tethered, like a Melbourne tram. Its introduction has been assisted by external subsidies from governments keen to pioneer green opportunity and harness cost effective green-electricity generation.

"It is suited to more permanent haul roads and where the cost of electricity supply is relatively inexpensive compared to diesel fuel costs," Mr. Arthur said.

The emergence of new battery technology such as lithium has presented an opportunity for on board energy storage. Previous battery technology, such as Sodium batteries, was limited by their size due to their power density and had been unwieldy in their attachment to the machine.

A hybrid system in which the truck switches between diesel and battery power or uses both, is a possible option but doesn't completely eliminate Scope 1 carbon emissions, according to Mr. Arthur.

Take up of a battery only application will be largely dependent on development of a recharging system which meets the needs of individual mining applications. Energy replenishment in a commercially viable time will be a major challenge. It raises the complex consideration of machine utilisation becoming unacceptable when cost per tonne, rightly, is still a major factor for investment in large mining trucks. An energy solution that is suitable to the customer application and still provides a certain operational flexibility would need to be found.

According to Mr. Arthur, adoption of a micro-hybrid application might result in the cubic capacity of the truck's diesel engine being reduced. Its adoption depended on sufficient battery storage on board and for complex cooling system requirements to be met.

Recharging on the run would require a control system in which electrical energy generated under braking retardation is returned to the on-board batteries for re-use as energy. The charge system would increase the need for cooling.

Zero-emission hydrogen continued to be regarded by many operators as the fuel source of the future, Mr. Arthur said. The challenges of onboard storage, supply chain and infrastructure delivery exist. But there is an underlying positivity in the market that this energy source provides the flexibility that miners are looking for and there is a determination that it will be harnessed as an alternate energy to reduce emissions.

Komatsu Autonomous trucks have hauled more than 3 billion tonnes of material globally, and have demonstrated efficiency gains of up to 10 percent, according to Mr. Arthur. 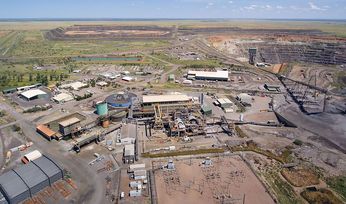 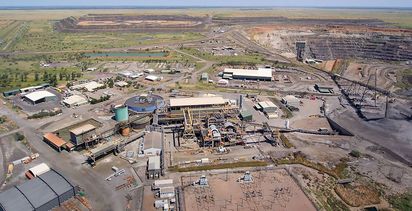