IT IS little secret that three-dimensional printing looms as an asset management strategy of the future. However, Sandvik decided it had to do a little more to get the word out. Yngwie Malmsteen offers a different view on the guitar as an "axe".

It is a case where a guitar, which is colloquially known as an "axe" can literally become an axe.

Sandvik created an electric guitar out of titanium and gave it to Swedish-born guitar virtuoso Yngwie Malmsteen to first play and then smash.

By his own admission, Malmsteens' guitar smash count has past the century mark.

In one of the videos below, Malmsteen can be heard playing the instrument and it sounds pretty much like the real thing.

Sandvik Machining Solutions president Klas Forsstrom said the company did not make products for consumers so people did not realise how far in the forefront its methods were.

"Creating a smash-proof guitar for a demanding musician like Malmsteen highlights the capabilities we bring to all complex manufacturing challenges.

Malmsteen said the result was amazing.

"I gave it everything I had but it was impossible to smash," he said.

For the guitar's 3D printed body Sandvik relied on its metal powder and additive manufacturing chops.

Lasers traced a design in beds of fine titanium powder, fusing layers of material one on top of the other.

The layers, each thinner than a human hair, built up to make the body of the guitar.

The weak point of any guitar is where the neck joins the body. Sandvik solved that by milling the neck and the main hub of the body as one piece.

The guitar's neck and fretboard were machined by Sandvik Coromant in one machine from a solid block of recycled stainless steel.

The next challenge was to strengthen the fret and neck as they extended into the guitar's body.

That came in the form of a super-light lattice structure that was sandwiched between the guitar's neck and fretboard.

It was made from recent Sandvik creation hyper-duplex steel.

The guitar's volume knobs and the tailpiece that anchors the strings were also created with 3D printing.

Extra material was milled from between the frets to meet Malmsteen's preference for a scalloped fretboard.

Drewman Guitars' Andy Holt, who worked with Sandvik engineers to create the guitar to match Malmsteen's playing style had a simple description of it.

"You could use the guitar as a hammer and it wouldn't break," he said.

The haul truck operator had 11 weeks industry experience and four weeks experience at the mine. 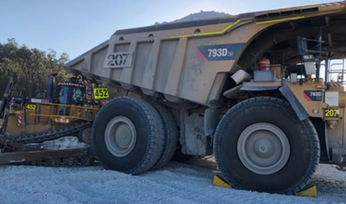 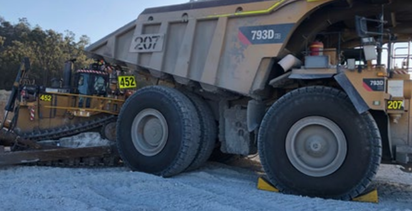