A DREAM to advance the cause of Aboriginals in the mining sector has taken some massive steps forward. The Australian Aboriginal Mining Corporation, a private company chaired by Carey Mining chief Dan Tucker, has been granted a mine gate deal with Fortescue Metals Group and is looking to acquire an iron ore project 80km northwest of Newman.

Providing that acquisition goes through, AAMC plans to be delivering iron ore to FMG's Cloudbreak hub by the fourth quarter of this year.

While AAMC has been around for about five years, it was the deal to buy the Wonmunna project from Ascot Resources that has brought Carey's hopes for the company closer to fruition.

There is still the matter of getting the funds for Ascot Resources and AAMC has corporate advisers PCF Capital shaking the tin to secure $30 million to $35 million.

AAMC has entered into an "arms-length" binding agreement to engage Carey Mining as the mining contractor for Wonmunna.

When it gets going, Wonmunna will be turning out 59% iron ore - certainly not the high grade FMG will be looking for to blend with its own lower grade iron ore - but not something to be sneezed at either.

Tucker believes the company will be able to turn out something a lot more valuable.

"We want to raise the awareness of the possibilities," he told Australia's Mining Monthly.

"The first thing to do is to have a sustainable, successful business.

"Once we have a successful, sustainable business delivering product we can ensure we can create opportunities at all levels for Aboriginal people."

That means roles for executives and down.

Tucker described the business world as one of the few elusive spaces Aboriginal people had not been able to conquer.

He likens it to Aboriginal people breaking into professional football and the arts.

Creating a successful business is something Tucker has been able to do himself.

He started Carey Mining in 1995 and has managed to keep it growing through some challenging times.

It has grown from a WA mining contractor into an international business.
Carey has a training arm that is a Registered Training Organisation that working all over Australia and in Malaysia.

So how did he do it?

"A lot of persistence and a lot of getting good people involved," Tucker said.

"Support from clients and funding bodies.

"If you don't have that support and persistence if you come up against the brick wall you probably stop.

"It's always going in cycles. If opportunities are everywhere you can get carried away. In lean times when work is not everywhere we try to work with that as well.

"It doesn't matter if you are a small company or a large company, you've got to keep your eye on the ball."

When it comes to Indigenous business, Tucker has seen three distinct cycles.
The first was in about 1995 when Western Australia's Eastern Goldfields had a bit of a boom.

Tucker said a lot of Aboriginal businesses started up then.
Carey was one of them.

Then came the mining construction boom in the Western Australian Pilbara.

Again, a lot of Aboriginal businesses started to capitalise on the opportunities that had landed in their back yard.

The most recent thing spurring on Aboriginal businesses has been the federal government's Indigenous Procurement Policy, which was created in 2015.

It has three main parts. The first is a target number of federal government contracts that need to be awarded to Indigenous business. In 2017-18 the target is 3% of the total procurement spend.

The second part is a mandatory amount set aside for remote contracts and contracts valued between $80,000 and $200,000.

The third is a minimum Indigenous participation requirement in contracts worth more than $7.5 million in certain industries.

Federal Attorney General Christian Porter has admitted the IPP is only a starting point.

That becomes obvious when compared with FMG's A Billion Opportunities program, which earlier this year marked $2 billion in contracts to Indigenous businesses.

However, the IPP has taken the Aboriginal business boom out of the traditional mining areas of the Goldfields and Pilbara and made it Australia-wide.

It also makes the possibility of an Aboriginal corporation mirroring the NANA Development Corporation a reality.

NANA grew out of the massive North Slope Native Title settlement with the Inupiat people of Alaska.

It started inauspiciously as a service provider to the accommodation facilities the oil companies built to get the North Slope oil and grew to become a major supplier to the US government and one of the largest contractors in the Gulf of Mexico. NANA had the contract to service Air Force One.

Part of NANA's success came from a US government policy that gave Indigenous-owned businesses a leg-up when going for government work.
While the Australian IPP is not exactly in the same vein, it is a start.

For Tucker, the opportunities for Aboriginal people who are keen to get into business are growing.

Tucker said those business people and the people they employed started to become role models for their community.

He said the children would see what their parents or their relatives were doing, the opportunities they were creating for themselves and would want to get a piece of that too.

"In time there will be more people getting involved with businesses," Tucker said.

"That will be closing the gap."
To make this happen, Tucker believes the support needs to be given to the Aboriginal entrepreneurs.
"They are the ones that see the way and own the idea," he said.

"They are the ones who will take the risk. The will reap the reward and look after their people.

"Then we'll find more of these entrepreneurs will come to the party."

Part of the plan to get MinRes' Ashburton operation up and running. 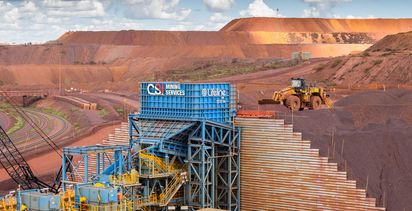