ANOTHER Aboriginal heritage battle is brewing in Western Australia’s north at the Browns Range rare earths mine as traditional custodians of the area fight to save ancient boab trees connected to a Dreamtime story about the king brown snake. The one boab tree protected on site

Halls Creek woman Brenda Garstone claims that despite her family being officially recognised as Traditional Owners of the Browns Range no-one is listening to them even though they found fresh geographical evidence of their Dreaming for the area that connects them to boab trees thinly scattered throughout the range.

Garstone said one tree featured a carving of Lingka, the Dreamtime king brown snake that connected her family to the Browns Range, near the WA-Northern Territory border in the remote east Kimberley, 165km southeast of Halls Creek.

Garstone's family is embroiled in a bitter battle with the Ngapa custodians of the Gardener Range who live at Ringer Soak, to get their Native Title claims over the area recognised and share in the mineral benefits.

They also want access to the site to firstly locate the trees and check on their health.

Northern Minerals confirmed to Australia's Mining Monthly it was aware of a large boab tree behind the plant, which it said had formed part of ongoing engagement with TOs.

A Northern Minerals spokesman said the tree remained fenced off and protected and was in good condition.

The company had no knowledge of the other trees.

Northern Minerals entered into a co-existence agreement with Jaru TOs in June 2014.

Garstone said that as a TO, her mother went to the signing thinking the mine was at Ringer Soak.

At the time, Jaru spokesman and KRED Enterprises CEO Wayne Bergmann said if progressed, the project had the potential to provide many positive economic and social benefits to the Jaru and the wider community.

The agreement included several economic and commercial outcomes for the Jaru linked to future production, plus some training, employment and community development initiatives.

Through the agreement Northern Minerals also promised to protect cultural heritage through the project's development.

Northern Minerals pledged to source up to 20% of the mine's workforce from Ringer Soak community, once it moved into full-scale plant production of the much sought-after heavy rare earth element dysprosium, as part of an $8.1 million training-to-work program with Wunan Foundation.

At the start of construction of Browns Range in July 2017, Northern Minerals managing director George Bauk told AMM the company would do everything it could to work with the Ringer Soak community and the broader Jaru group to get as much local content as possible, and he was proud to already have three men from the community on the payroll, as their input was invaluable.

However, it soon emerged not everyone was happy with the level of consultation, when Garstone's  family group attended the site's opening the following year and discovered the sacred boab tree next to the plant was sick.

Garstone told AMM at the ceremony in 2018 that her family are the traditional custodians of the Browns Range and reside in Halls Creek, Kununurra and Wave Hill.

Wave Hill in the NT is the site of Australia's first land claim.

In 1966 200 Aboriginal stockmen and their families walked off the pastoral station owned by British aristocrat Lord Vestey, after years of mistreatment. That was the Wave Hill walk-off.

The nine-year strike ended when then prime minister Gough Whitlam handed the land's title over to the Gurindji people.

That was considered the first act of restitution to Aboriginal people and the start of the land rights movement.

Rolling out a Dreamtime painting that told the story of the tree, Michael George said they had been left out of the negotiations.

Garstone said the representative TOs speaking at the ceremony became uncomfortable when the proper TOs arrived as they had no claim to the area.

She said the Jaru people at Ringer Soak were not the custodians of the area around the mine and were linked to the Water (Ngapa) Dreaming, not their Lingka Dreaming.

The Ngapa dreaming track is on the Gardener Range, which is where the Northern Minerals proposed project Boulder Ridge is located, Garstone said.

Garstone said her family were officially recognised as traditional custodians for the Browns Range but still no-one was listening to them.

Despite admitting in supporting documents for the environmental impact assessment in 2013 that the project would disturb archaeological and ethnographic sites and artefacts and limit TOs' access to areas currently used for hunting and ceremonies, Northern Minerals was approved to mine within the project area.

The company told the Environmental Protection Authority in 2013 it had identified a number of Aboriginal heritage sites within the Browns Range exploration tenements and planned to carry out further archaeological and ethnographic assessments of any possible project impacts on those sites that are important to the Jaru.

The company also promised to provide cultural awareness training and site inductions to all mine site personnel and contractors involved in ground disturbing activities, detailing the importance of respecting cultural heritage and reporting of any potential or newly discovered heritage sites.

However, Garstone said the company was never told the importance of those sites because the Jaru from Ringer Soak did not know the stories. Only the rightful TOs did.

So too were the Kimberley Land Council and Wunan Foundation. 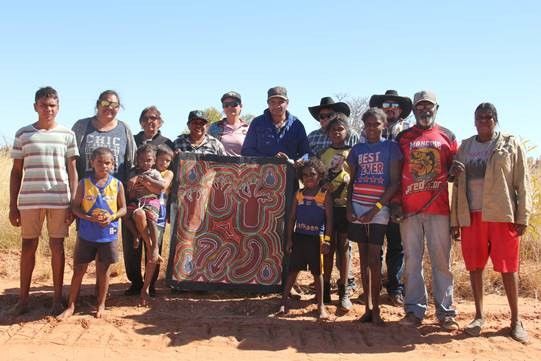