NEW South Wales contractor Hamiltons Blasting Services has been convicted and fined a total of $324,000 in the NSW District Court on December 17 for three offences under the state’s Work Health and Safety Act (2011), in relation to a blasting incident in 2018 at the Albury Quarry in Ettamogah that put several people at risk and sent them running for cover. 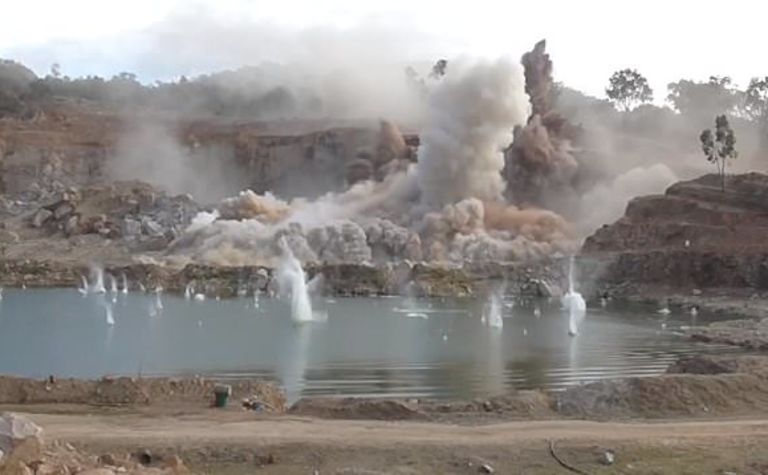 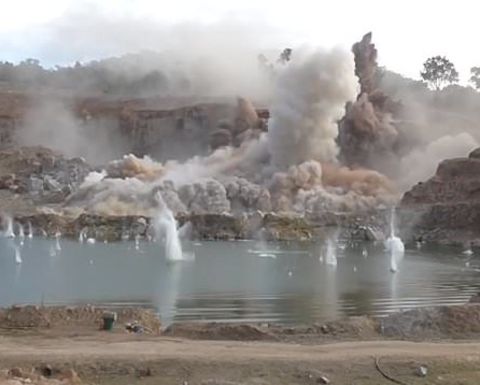 Image of the incident supplied by Resources Regulator

HBS director David Hamilton was fined $22,500 for breaching section 32 of the NSW WHS Act for failing to ensure his actions did not adversely affect the safety and health of others.

At the time of the overburden blast along a large bench in the south-western area of the quarry there were four members of the public within the firing zone plus a visiting truck driver, the quarry manager, a shotfirer and five workers.

The members of the public included the partner and three friends of the quarry manager.

The mine operator was not there to supervise the blast. No exclusion zone had been set nor sentries or blast guards assigned.

There were four people about 275m from the blast area while the other eight, including the shotfirer, were about 320m away.

The blast sent rocks flying into the air and three light vehicles and two excavators were struck by flyrock.

Investigations by the Resources Regulator found poor supervision led to the shotfirer breaching several technical safety standards, including not using the correct type of explosive in all blast holes and putting the firing location in the wrong place.

The blast holes were drilled by subcontractor Edge Drilling to a depth of 24m before being loaded with explosives supplied by Orica.

Hamilton had previously ordered 18,540kg of Orica's Centra Gold bulk explosive product, which was loaded into 118 blast holes for the blast by three Orica workers, and a further 15 blast holes in oversize rock spread over the quarry floor for the "toe" shot.

The blast holes were stemmed, detonators were inserted, and two lead-in lines were rolled out from the two initiation holes for the toe shot and the blast to the firing location.

Despite having 700m of lead-in line on each reel, Hamilton did not use the line to measure the distance between the firing location and the face or use software or a map of the quarry to calculate the distance.

He also failed to use a range finder or other measuring device to calculate the distance between the blast and the firing location.

As a result of the blast a large rock went through the windscreen and landed on the driver's seat of a grey Amarok, while another rock ricocheted into and broke the rear right window of a red Patrol, damaging its roof and roof racks.

Another rock ricocheted into the windscreen of a white Navara, cracking the left-hand corner of the windscreen, and another hit an excavator's air cleaner.

One attendee was lucky to escape injury when a rock passed close by his head, then hit the boom of the excavator and cracked a hydraulic pipe.

Another $12,000 fine was issued for disturbing the incident scene.

At the time, those present at the blast were told to delete any video footage they had of the incident.

Quarry operator Burgess Earthmoving was previously convicted of two Category 2 offences for its failures in relation to the same incident.

The court heard that Hamilton knew he was responsible for organising the blasts, including surveying, drilling, measuring borehole deviation, loading and firing.

He also understood it was Burgess' responsibility to organise the site and provide employees to help load the shot. 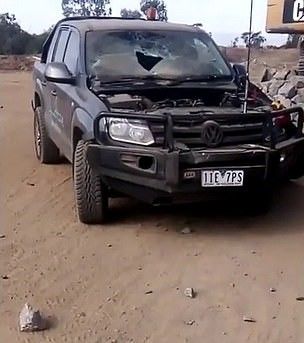 Image of the incident supplied by Resources Regulator 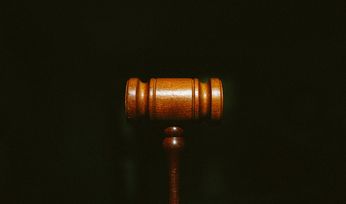