Power station fire to burn on

A MILWAUKEE power plant coal fire has been brought under control but is expected to burn for several days.

About 100 tons of coal caught fire on Sunday morning at the WE Energies power plant.

The fire has been confined to a 25-foot deep hopper on the sixth floor of the building.

WE Energies spokeswoman Cathy Schulze said the fire started in an area where coal was held before it was fed into one of three boilers.

She said the utility was investigating the cause of the fire.

Crews are expected to work for the next few days to remove the smouldering coal.

The unusual nature of the fire initially posed some problems for firefighters.

CBS58.com reports foam from the airport unit was pumped to the sixth floor using an aerial ladder and firefighters on that floor then used handlines to apply the foam to the hopper.

This helped slow the fire but had to be suspended for fear of water in the foam damaging electrical panels on lower floors.

It was then determined the best course of action was to get plant personnel to manually remove the coal from the hopper.

Fears there could be a repeat of the Hazelwood fire. 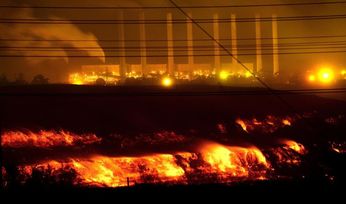 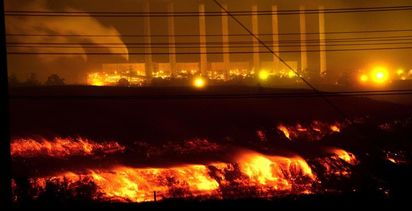