NIOSH now has the capability to test variables and control technologies that impact longwall dust levels and worker exposure in a full-scale, longwall dust gallery. 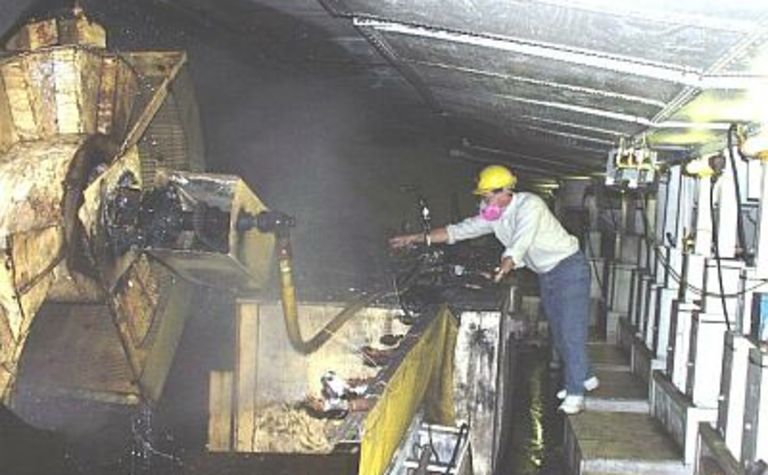 The dust gallery consists of wooden mock ups of a double-drum shearer and 24 shields on a simulated longwall face. The shearer is equipped with rotating cutting drums containing water sprays, along with external spray manifolds on the body of the shearer. Dust is injected, using compressed air, into the cutting area of the drums so that the rotation of the drum mixes the dust as it would underground.

The gallery has the capability of lowering or raising the roof, controlling the air flow, controlling water quantities and pressures. All quantitative data, including average air velocity, water pressure, and instantaneous dust levels, are recorded and sent into a control room for monitoring throughout the test.

Three different levels of air velocity, water pressure and water quantities were evaluated for both tail-to-head and head-to-tail cutting directions. The tests were conducted at a mining height of 2.2 metres and also assessed the effectiveness of directional spray systems verses basic spray systems, where the external nozzles on the shearer were orientated perpendicular to the coal face.

Gravimetric and instantaneous dust samplers were used at multiple sampling locations along the face to quantify respirable dust levels. Three dust sampling packages were used to monitor dust levels in the area of the headgate and tailgate shearer operators and a jacksetter downwind of the shearer.

Each sampling package was moved over a five-shield area during the course of testing to develop a profile of dust levels along the face. Dust levels were also measured in the return airway from the longwall face.

“We found, not surprisingly, that increases in air flow made the biggest difference in dust levels followed by water pressure and then water quantity,” said NIOSH dust specialist Jay Colinet, Supervisory Mining Engineer.

“Increases in air flow provide additional dilution, help hold the dust generated by the shearer drums close to the face and more quickly move the generated dust away from the worker locations.”

“The directional external spray system on the shearer, also known as the shearer-clearer, was more effective than the basic spray system in confining dust near the face, thus minimizing dust contamination in the walkway,” he said.

The total impact of increases in water quantity could not be identified since the research could not simulate the added benefit that may result from increasing the moisture on the run-of-mine coal as it is transported through the mine.

Findings from this research and other ongoing longwall research have indicated that U.S. longwall operations continue to increase airflow on their faces in an effort to control dust and gas emissions.

“What we are finding is that the maximum air quantity we can put through our gallery is on the low side. US mines have increased the amount of air they are using, so we are in the process of looking at purchasing another fan so we can upgrade our airflow capabilities in the gallery,” Colinet said.

After gallery modifications are complete, testing to improve external spray systems for higher coal operations in the US, 3 meters or higher, will be initiated.

The monitor was exposed to surface dust from the seat and possibly other areas.