AUSTRALIA’S longwall mine production was flat in 1998-99, compared with the previous 12 months, as the industry continued on its restructuring path amid uncertainty about coal prices and markets. Thirty-four mines produced 67,911,200t (longwall and development coal) in 1998-99, according to the latest Joint Coal Board statistical review, compared with the 68,571,300t produced by 33 mines in 1997-98.

While significant investment in new longwall production capacity saw the start-up of Newlands (August 1998), Moranbah North (February 1999) and Oaky North (February 1999) in Queensland during the latest fiscal year, the period also saw the demise of older New South Wales pits such as Oakdale and Metropolitan. Teralba joined this latter group post the end of the year. They may yet see new life, as have Bellambi West (ex-South Bulli), Southland (Ellalong), New Wallsend No.2 (Gretley) and Tahmoor, but then perhaps they have had their day.

At the end of 1998-99 there were 32 longwall mines in operation, compared with 30 a year before. The former ARCO-owned Gordonstone mine in central Queensland, renamed Kestrel by new owner Rio Tinto, has since rejoined the longwall producer ranks. The restart at Kestrel, the impact of a full year’s production from the likes of Newlands, Oaky North and Moranbah North, and improvement at Crinum, North Goonyella and Kenmare, in Queensland, and South Bulga, Ulan and Wambo in NSW, could boost Australian longwall mine output significantly in 1999-2000.

The static overall result for the industry masked several strong performances at individual mines, including a 124% production rise at Bellambi West, the ex-Shell mine now run by locally-owned Advance Coal; a 57% output jump at Cumnock in the Hunter Valley; a 40% increase at Alliance, the central Queensland “punch” longwall mine operated by Thiess Contractors and Namoi Mining; a 36% increase at Powercoal’s improving Angus Place operation in the NSW Western coalfield; a 21% rise in production at Oaky Creek No.1 in the Bowen Basin; and a 14% rise at West Wallsend, near Newcastle.

Buoyed by the performance of Oaky Creek No.1, operator MIM Holdings had further reason to smile with the first 11 months of longwall production at Newlands yielding more than 3.5 million tonnes, and Oaky North’s first five months production reaching 1.86mt. MIM also reported the 106m of roadway development completed in a 12-hour shift at Newlands in the June quarter was a new Australian record.

Shell’s new Moranbah North operation produced 2.3mt in the five months from February despite efforts to slow down the longwall so that production did not get too far ahead of coal sales.

On the other side of the ledger mines which did not live up to expectations in 1998-99 included Crinum, where production was down 8% on the previous 12 months, but was also well short of the budgeted figure of 4mt; Teralba, which saw a 62% drop in production before its closure; North Goonyella, where output fell 55%; Cordeaux, which slumped 35%; and South Bulga, the former industry pace-setter which posted a 21% production fall.

Tahmoor, owned by Australian Stock Exchange-listed Austral Coal Ltd, was another to disappoint. Its 1998-99 production was 36% lower than the previous 12 months at 1.3mt, however, its June quarter performance was stronger and Austral secured important new sales contracts during the period. Samsung/Cyprus-owned Springvale, near Lithgow in NSW, saw its production drop 30% to less than 1.5mt due to its well documented geotechnical and other problems.

While new longwalls now appear further out on the horizon than they were several years ago, BHP Coal reported development of the Goonyella Exploration Adit — potentially a precursor to longwall mining of the Goonyella Middle Seam — started on schedule last month, and a pre-feasibility study on a new longwall operation at Saraji was also progressing. Native title issues had, however, delayed exploration on part of the proposed mining lease.

Iron ore keeps crown as king of minerals with $116 billion in exports for 2020. 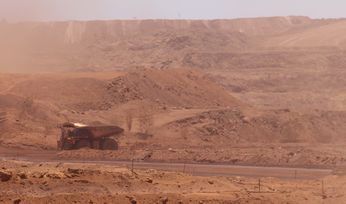 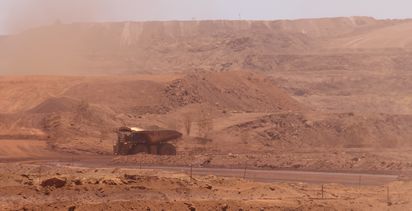 Hogsback on the IEA report