Billiton has recently announced that due to the ongoing impact of low coal prices, and in particular the recent further 4% reduction in contract coal prices in Japan, its wholly-owned subsidiary Ingwe had initiated a restructuring and rationalisation program.

This program, focused on the Douglas and Koornfontein collieries in South Africa, would result in Ingwe's export tonnages being reduced by about 2.2 million tonnes per annum and annual costs by over R400 million ($US62 million). It followed a comprehensive review of the performance and profitability of all Ingwe's operations.

Douglas' output was expected to be cut by 15% (1999 production: 9.9Mt) and Koornfontein's 30% (6.2Mt). The planned improvements to overall operating costs would enable both collieries to again become nett positive contributors to Billiton, the company said.

About 2000 people would be affected across Ingwe operations. The company said efforts were being made to minimise retrenchments, and it was hoped up to 1000 workers would either retire normally, be offered early retirement, accept voluntary separation or be redeployed within Ingwe at other operations (for example, the Boschmanskrans project will create some 230 employment opportunities).

Ingwe's managing director, Eddie Scholtz, said: "The last three years have been extremely challenging for Ingwe operations because of the very poor market conditions we have faced. To maintain the efficiency and profitability of our business, and to ensure the long-term viability of our operations, we have to look honestly at areas of underperformance and

high costs, particularly in an environment of very depressed prices.

"The program we have initiated will put both Douglas and Koornfontein on a more secure financial base, which is critical to safeguard employment going forward.

"As in the past, we are committed to working together with our employees and their representatives in order to ensure that the process is fair and transparent, and that it delivers real solutions to achieve Ingwe's ongoing objective of being a world-class cost-competitive coal producer."

The A60H haulers are used for overburden removal, while the EC480DL excavators help transfer coal. 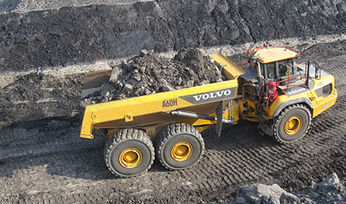 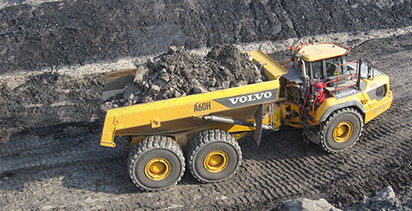